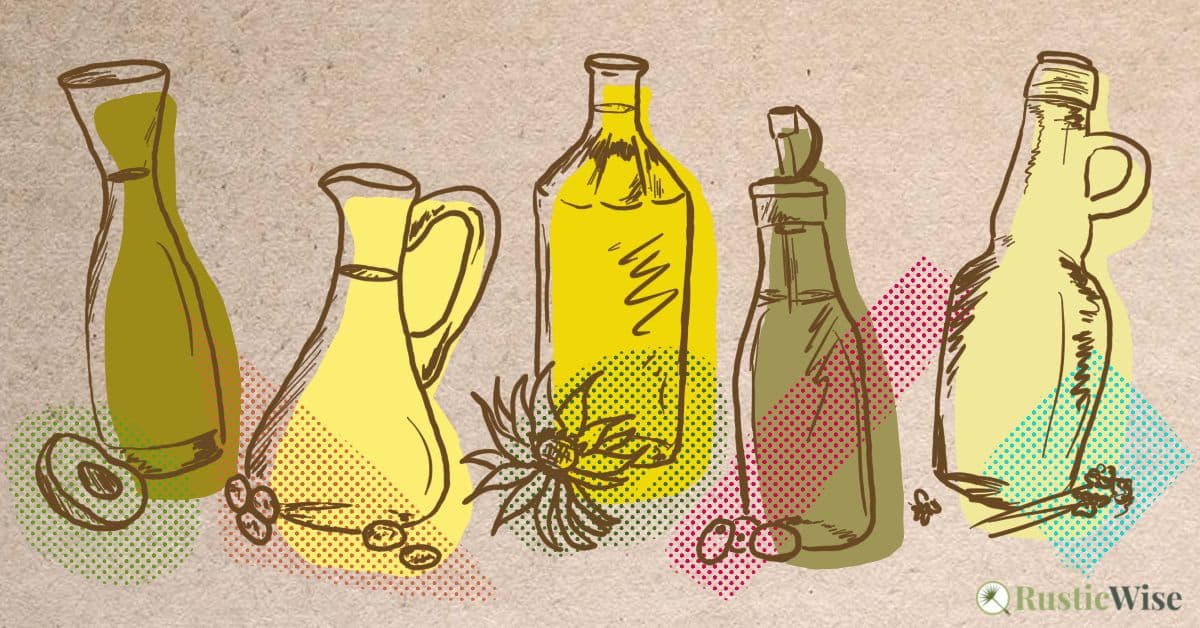 
A bar of handmade soap is only as good as the ingredients you put in it. One of the key components of soap is the fats, or oils, used. There are many types of vegetable oil for soap making—each with unique properties that affect the finished product. It’s important to consider the fatty acids, hardness, shelf life, and SAP Value of the vegetable oil before using it in your soap recipe.

Back in the day, people made homemade soap from a simple concoction of animal lard or tallow, lye, and water. However, there are many vegetable-based oils and butters available today for those who prefer to make vegan or plant-based soap.

Read on to learn more about the most common types of vegetable oil for soap making, the properties of each, and considerations to keep in mind when selecting your vegetable oils.

What exactly is in vegetable oil?

The name vegetable oil is a broad term that encompasses many types of vegetable-based oils, most commonly soybean oil. In fact, when you pick up a bottle of vegetable oil from the grocery store, chances are, it’s comprising 85 percent soybean oil¹. The rest of the contents are often a blend of canola, coconut, corn, cottonseed, palm oil, peanut, olive, sesame, safflower, or sunflower oil.

In soap making, a basic vegetable oil soap may just refer to a blend of plant-based oils such as coconut, shea butter, olive, palm, or castor oil.

Can you use vegetable oil in soap?

There’s some confusion about the term “vegetable oil” in soap. Some people may think of a bottle of vegetable oil you pick up at the grocery store. This is not something you would normally add to a batch of homemade cold process or hot process soap (which we’ll explain shortly).

A more precise term that applies to soap making is vegetable-based oil, or plant-based oil. For example, using a bottle of 100 percent pure sunflower oil (a plant-based oil), which would be suitable for making soap, is not the same as using a blended vegetable oil.

Most bottles of vegetable oil you’ll find on store shelves are a mixture of several types of oil. Using a blended vegetable oil in soap may prove problematic for several reasons.

First, the exact amount of each type of oil is unknown. It would be very difficult to calculate the amount of lye needed to saponify each oil.

Second, the quality of the vegetable oil may be less than that of a pure oil. You’ll get unpredictable results. It’s best to stick with a pure type of vegetable-based oil for a better batch of homemade soap.

Common base oils used in soap

With many soap recipes, you’ll find a combination of oils or butters used to create a desired effect in soap. For example, a soap recipe that calls for olive oil, coconut oil, and castor oil would take on the properties of the three oils. Olive oil is known for its mild conditioning properties, coconut oil lends some hardness and cleaning power, and a splash of castor oil produces a nice lather.

There are also some soap recipes that feature only one type of oil. Olive oil (Castile soap) is a popular soap that’s often featured solo in liquid soap, or bar soap. It’s known for its gentleness and conditioning qualities.

Let’s take a closer look at commonly used base oils in soap².

Can you use vegetable oil instead of olive oil in soap?

No, you can’t simply swap any vegetable oil for olive oil in a soap recipe. To avoid getting a gooey mess, you’ll need to consider the properties of the oil in question, and try to replace it with an oil with similar qualities

To get an idea of the type of qualities of the oil you’re looking to replace, head on over to Soap Calc³ and select olive oil from the list of oils. You’ll see a breakdown in numbers on the bottom left explaining the qualities of the oil along with a rough percentage of the fatty acids present (we’ll dig deeper into this in the next section).

There are many reasons why you might want to make a substitution. Maybe you ran out of that oil, or can’t find it anywhere. Perhaps you’re trying to find a more affordable option.

But to save yourself a lot of trouble, it’s always important to run your soap recipe through a Lye Calculator before you start to ensure the amount of lye is adjusted.

The importance of fatty acids in soap making

Making a batch of homemade soap is part art, part science. What gives one bar of soap its luxurious lather, while another barely lathers at all? It has to do with the oils used in your soap recipe, in particular, the fatty acids profile of each oil, fat, or butter.

Every oil, fat or butter used in soap has a unique fatty acid profile. This profile affects the finished soap. We can group fatty acids into saturated and unsaturated fatty acids.

If you drill down to the molecular level, saturated fatty acids fit together neatly, which allows them to create harder bars of soap. This group of saturated acids is great at cleaning; however, if you add too much, they can make your skin dry⁴.

Most soaps made with saturated fatty acids provide a good, creamy lather.

Unsaturated fatty acids give handmade soap a fluffier quality with a weaker lather. This group of fatty acids produce milder, softer soaps that are gentler on the skin and not as high on the cleansing scale.

One fatty acid that defies that general quality is ricinoleic acid found in castor oil: it’s the go-to oil for creating a strong, fluffy lather⁴.

If you’re deciding what types of vegetable-based oil to use in your next batch of soap, here are a few things to keep in mind.

Not all oils, butters, and fats have the same shelf life. In fact, some can go rancid more quickly than others, creating those dreadful orange spots that strike fear in the heart of every soap maker.

Check your bottle for an expiration date before using it in your soap.

If you’re looking for oils with a longer shelf life, coconut oil, shea butter, olive oil, and castor oil have a shelf life of about two years.

The degree of “hardness” can categorize oils and affect the properties they lend to soap. Bars of soap can be soft (think olive oil-based soaps), hard (coconut oil), or brittle.

Soft oils are those that are liquid at room temperature, such as olive oil, safflower oil, sunflower oil. They take longer to reach trace. When added in higher amounts, they can make the soap bar softer.

Especially with olive oil-based soaps, the trick is to cure the soap for a longer time to create a harder, more durable bar of soap.

Brittle oils are those that require a bit of effort to remove from the mold as they’ve become very hard and brittle. These include palm kernel oil and cocoa butter. Brittle oils are quick to set and cure, and easier to unmold.

The SAP Value indicates the amount of lye required to saponify the oil or butter in your recipe. Simply put, oils with a higher SAP Value require more lye in the recipe.

Don’t worry about the math too much—just run your recipe through an online lye calculator.

If you’re looking for a few cheap vegetable oils for soap making, canola oil, soybean oil, and palm oil are good choices (although some prefer to avoid palm oil for ethical reasons).

Certain grades of olive oil are also affordable. When making soap, there’s not much need to shell out big bucks for the finest grade of extra-virgin olive oil, as you won’t be eating it.

Lower grades of olive oil are more affordable and produce: Pure/Grade A, and Pomace olive oils are perfectly fine for soap making.

Can cooking oil be used for soap making?

It’s best to use a fresh bottle (not one that’s been sitting on your shelf for years). This helps your batch of soap last longer. Find a good recipe using your type of cooking oil, and run everything through a lye calculator first.

Is vegetable soap good for acne?

If you have acne, it’s best to stay clear of any facial soaps with artificial fragrances (essential oils are preferred), or artificial colors that may further irritate the skin. Look for natural, plant-based soaps with noncomedogenic oils (won’t clog pores). 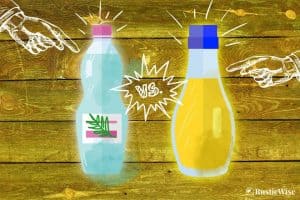 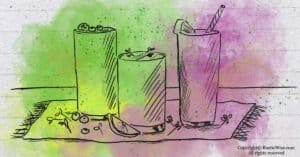 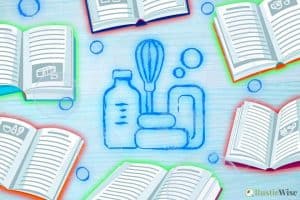 If you’re looking to delve into the world of soap making, here are the 10 best soap making books to read, whether you’re a newbie, or seasoned pro. 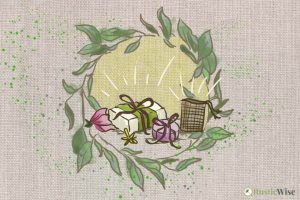 Now that you’ve made your batch of homemade soap, what next? Here’s a roundup of 13 eco-friendly soap packaging ideas that fit every budget. 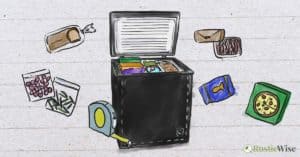 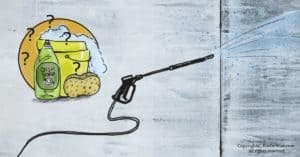